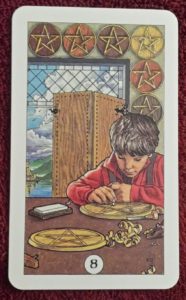 Today’s card comes from one of the mini-stories we see throughout the Minor Arcana. We see a young boy doing apprentice work. He is carving pentacles over and over and over again until he can do it perfectly without thinking. It is the lowest rung on his way to mastering his craft. He probably doesn’t appreciate this. He probably feels like he is being squandered in this task. He feels ready to move forward, but the master can see what is lacking. He will continue in this tedious work until it is time to move forward. Later he will likely look back on this time with a different appreciation, understanding its value and necessity.

This is a card of learning and doing the hard, low-level work to acquire skill and knowledge. Movies and television show that we learn things through montage, an edited sequence of moments where the hero builds ability with a few humorous mishaps along the way. He emerges a new man, fully capable and ready for the task. In reality, this sort of development takes time, and rather a lot of it. Studies suggest that one needs to spend 10,000 hours doing something to achieve expertise. Assuming that one worked 40 hour weeks at a thing, mastery could occur in about 5 years. Reality, though, in our modern society is that one will likely spend more like 10-20 hours a week on the actual item of mastery, the rest of the time spent in meetings and various other things that are not the core work. That means it takes between 10 and 20 years to achieve mastery.

When we take on new things we start over to a degree. Yes, some experience may carry over, but that will only show in the evolution. We must be prepared to take on new learning with the same diligence and deference as a much younger version of ourselves. Overnight success is the result of years in preparation. During this apprenticeship, whether actual or self-imposed, we will have to work through our mistakes. We may have to suffer some indignities and disrespect by other, more accomplished people in the craft. We may be treated like a child. These things do not matter. What matters is the dedication and determination to see the thing done, to not just be competent at something but to be amazing at it. Many never make it that far. They give up too soon.

The appearance of this card should reassure you that you can learn new things. It’s a good time to take something else on, provided you are patient with yourself and accept that it will take hard work to achieve. It should also remind you of the value of the hard, underpaid, underappreciated work that you do right now. It is not for aught. Provided that your work is a part of a further goal and not merely submission to the will of others, enduring this time builds the skill and strength that you need to cross that next threshold. So, whistle while you work, envisioning that day when you leave this behind and move to the next level.

It must be related, though. Washing dishes is not going to make you a rock star. Practicing your music and playing gigs is needed. Washing the dishes may help to fund that and be a part of the bigger picture, but if you’re not putting in the musical effort it will never go further. Washing dishes becomes your secret identity, while the other work continues. This is all exhausting and it can be easy to become discouraged. The Eight of Pentacles is here to encourage you and say that it really is all worth it.

Now I reflect on this card for myself. I am in the midst of all of this. While I have accomplishments, I am somewhat new on the current version of my path. I attract respect from some and derision from others and I am prone to the frustration of wanting to be further on the path, faster. Yet, all the work needs to be done, and there are no shortcuts. I can see the bigger vision or at least parts of it. It’s becoming clearer every day. The things that frustrate me today are relevant and I try to keep that in mind and maintain a sense of humor about it all. That’s not always easy.

Today I have some tasks to perform and I will do them, though it would be nice to be at my leisure today. I have some learning I should be doing that I have let slide because I was “busy.” I need to be more focused on that as well. Everything around me at the moment is building the better, more confident, more competent me. Later I will look back on this time with a different appreciation, recognizing its value and necessity.